Palissander is committed to breaking down boundaries between people. It has been using its theme-based approach to bring hope-filled programmes to both local and overseas communities:

In 2002 Palissander established a multicultural ensemble including a Zulu praise singer and members of The Soccajasco Kids to perform a Peace programme at the 25th World Conference of the International Society for Music Education (ISME) in Bergen, Norway. The ensemble was the only performing group from Africa at the conference.
The Peace programme was also performed jointly by Palissander and The Soccajasco Kids at the 2003 conference of the Pan African Society for Musical Arts Education in Kisumu, Kenya. The programme was released on CD later that year.
Click here to view the repertoire of 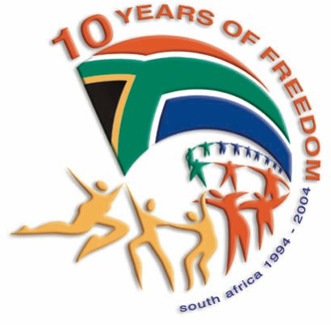 In 2004 Palissander again combined with members of The Soccajasco Kids to take part in the Ninth International Choir Festival of Provence with concerts in Italy and France. During this festival the choir performed a programme entitled "Siyahamba - we are marching in the light of God" to celebrate the tenth anniversary of democracy in South Africa. The choir received standing ovations throughout its tour and was invited by the organisers to do the closing performance during the final gala concert in St Maximin. The South African works from this programme were released on CD in December 2005.

Palissander`s theme for 2005, Time(less), provided hope by contrasting our life on earth in which time and place are important with our timeless existence with God. The programme structure was to a large extent based on the text of the penultimate work, The present tense, which thanks God for the past, present and future, but in the end emphasises the present as the time of our life. This programme deeply affected the audiences during the choir`s tour to the West Coast of South Africa.

The 2006 programme, Vuka - live a new life today, focused on the African dream for peace, love and harmony. Although South Africa has been a democracy for more than a decade, much remains to be done to make this dream come true not only for South Africa, but for Africa as a whole. The title song of the programme, Vuka uzenzele - arise, do it yourself, states that we don`t have to wait for a new world to arrive - we can make it happen ourselves through love. This is equally true for every country and every individual worldwide. We don`t have to wait for tomorrow, today already belongs to us.

The 2007 theme, Jubilate, celebrated the first 15 years of Palissander`s existence and portrayed the choir`s gratitude for having been blessed since its inception. The programme celebrated eight concepts that have given direction to the choir over the years: "Hope, faith, life, love, dream, joy, truth, soul".
Click here to view the Jubilate repertoire.

In 2007 Palissander was invited by the University of Johannesburg Kingsway Choir to participate in two performances of Karl Jenkins` The Armed Man – A Mass for Peace, conducted by the composer. 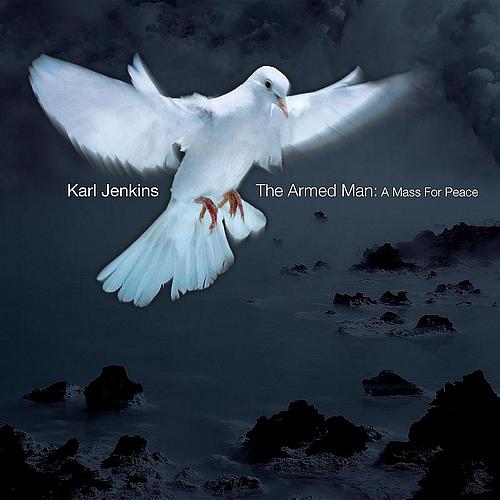 The work is the latest in a six-century old tradition of "Armed Man" masses that take the fifteenth century French song "L`Homme Armé" as their starting point. According to Guy Wilson, Master of the Royal Armouries: "The theme that `the armed man must be feared`, which is the message of the song, seemed to me painfully relevant to the 20th century and so the idea was born to commission a modern `Armed Man Mass`. What better way both to look back and reflect as we leave behind the most war-torn and destructive century in human history, and to look ahead with hope and commit ourselves to a new and more peaceful millennium."

South Africa is currently experiencing one of the worst AIDS epidemics in the world. By the end of 2007 there were 5,7 million people living with HIV in South Africa, with almost 1 000 AIDS deaths occurring every day. Each member of the South African community has to decide how to respond to this challenge.
The 2008 programme, Hymn to life, considered the numerous critical choices every person and community worldwide has to make as we search for our place in life and face challenges such as HIV/AIDS. Will we choose isolation, violence or compassion? Will we stand up for what we believe?
We are like music boxes - each with a unique song. The choices that we make reflect this song. What do people hear when they listen closely - a hymn to life, or a song of despair?
Click here to view the Hymn of life repertoire.

2008 UBI CARITAS – LOVE IS THE WAY TO TOLERANCE

For the International Choir Festival of Sacred Music Palissander compiled a programme consisting mostly of South African music. The programme represented a conversation with God in which He is called upon to rid us of our intolerance. He replies that His blood brings redemption and hope and that He is with us whenever we show love and loving-kindness. Let us therefore walk in the way of the Lord.

2009 WHERE WILL THE CHILDREN PLAY? 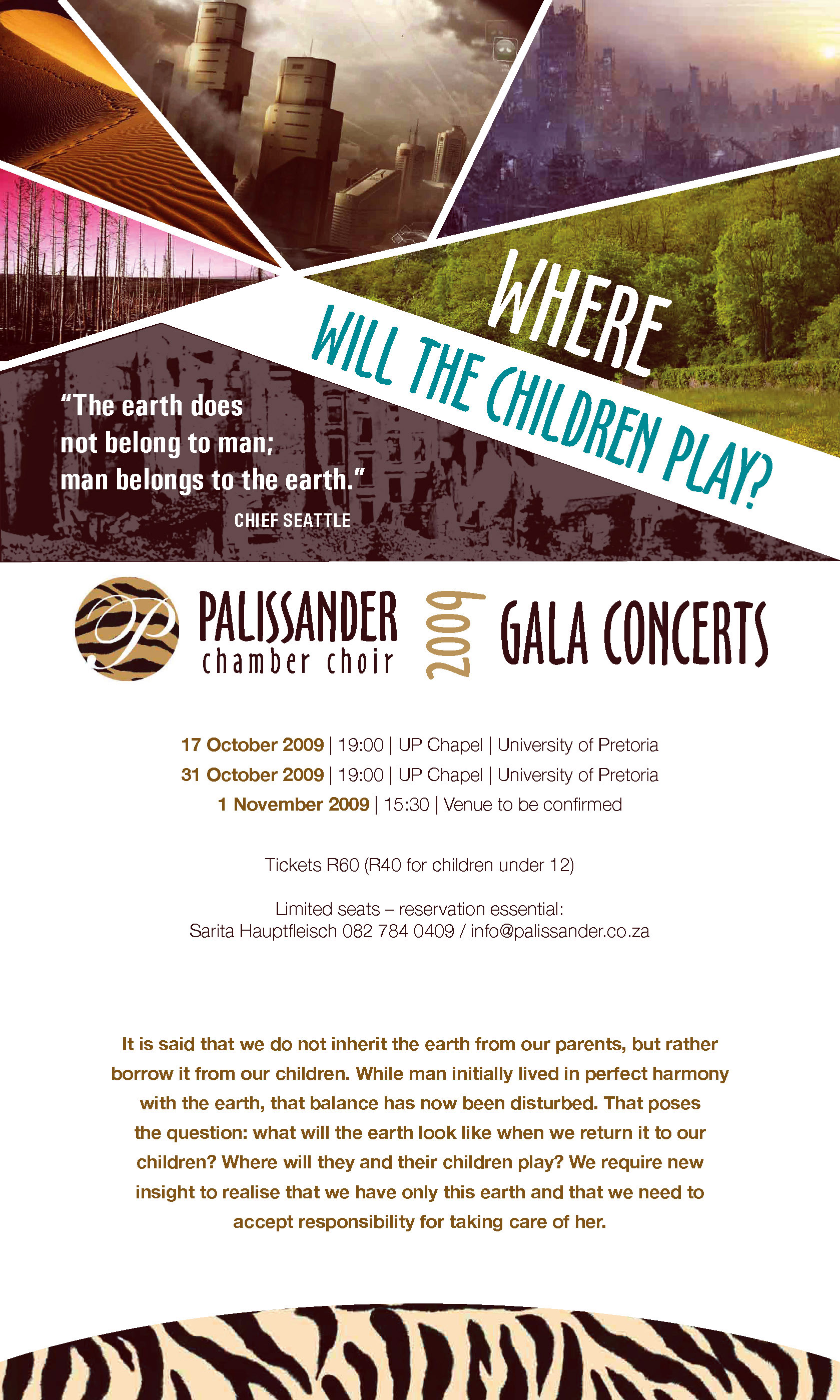 It is often said that we do not inherit the earth from our parents, but rather borrow it from our children. While man initially lived in perfect harmony with the earth, the balance has now been disturbed. This gives rise to the question: what will the earth look like when we return it to our children? Where will they and their children play? We need new insight in order to realise that we have only one earth and that we need to accept the responsibility of taking care of her.
Click here to view the Where the children play repertoire. 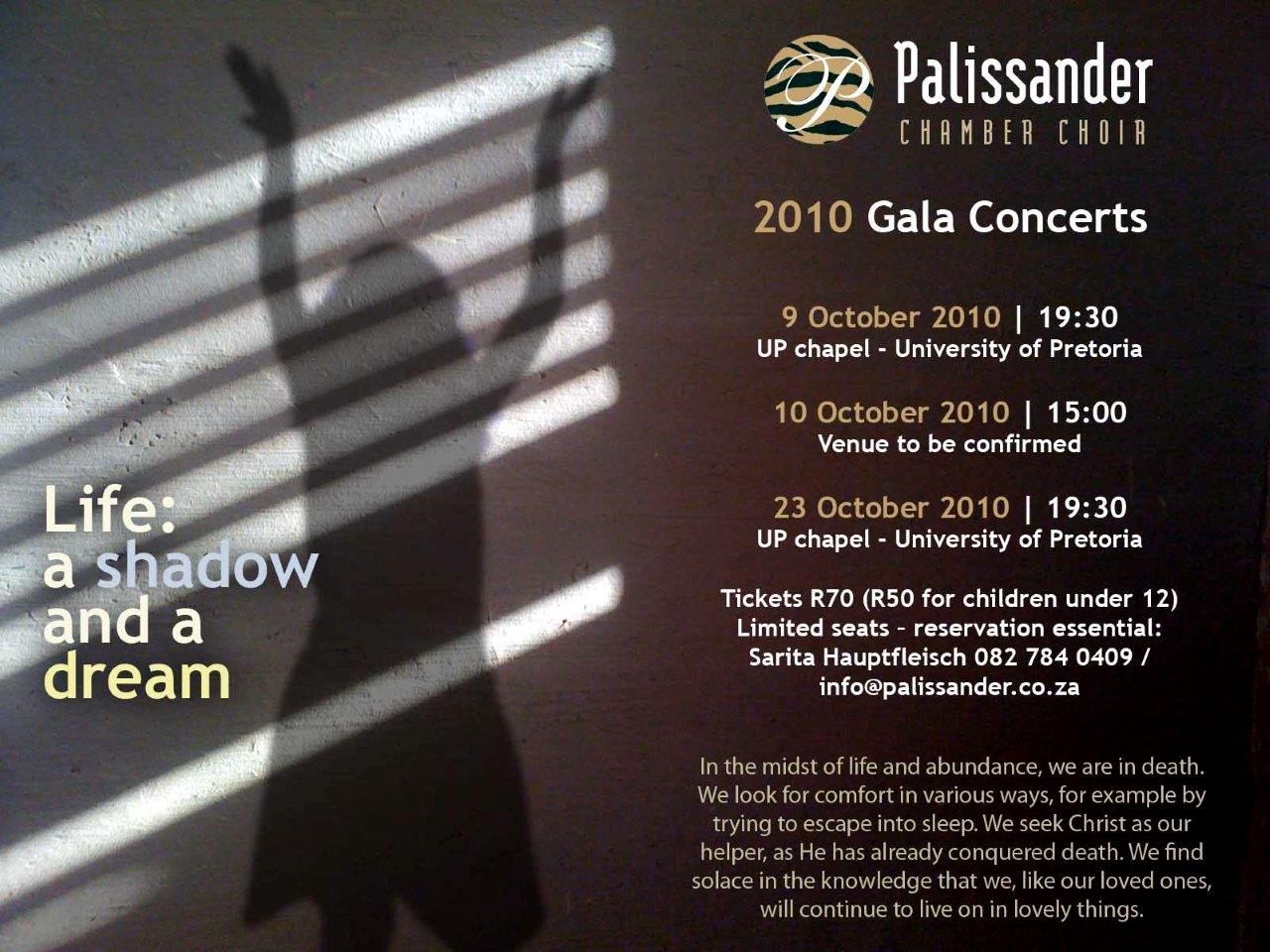 The 2010 theme considered the fact that in the midst of life we are in death. In searching for consolation we realise that we need to reach out and that the Lord is our helper. We come to the conclusion that we do not need to fear death, as we will continue to live on in each lovely thing.
Click here to view the Life: A shadow and a dream repertoire.

2011 LET AN EARTH SONG ECHO IN YOUR HEART 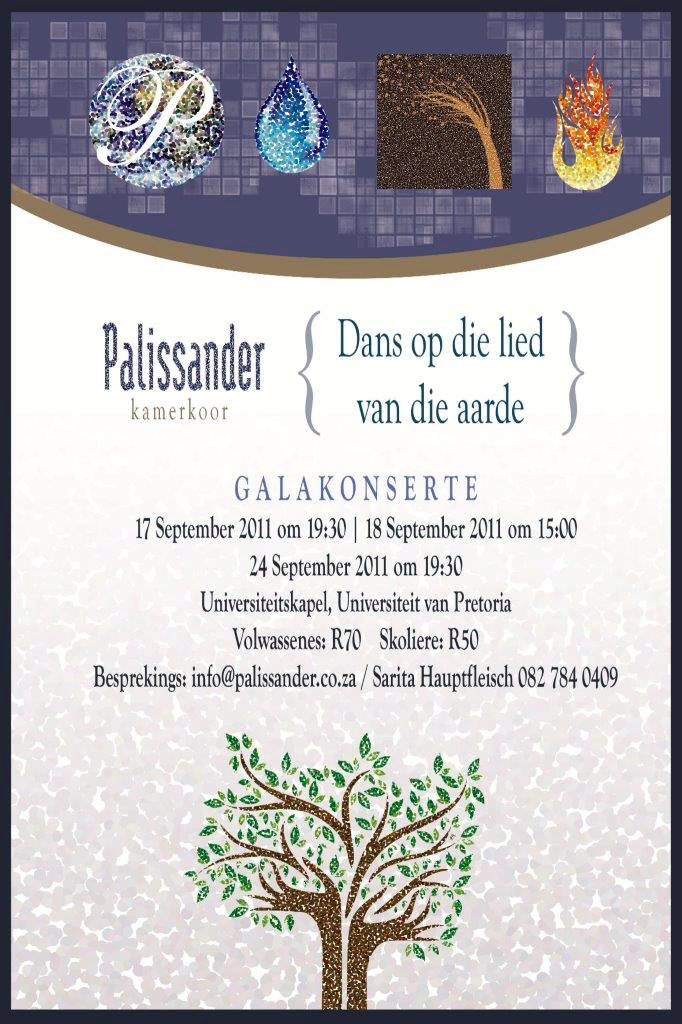 As the scorched earth cries out in vain, our torn hearts cry out in pain. We can lose hope as we seek our place in the world.
But the elements - earth, air, water, and fire - can nurture us:
Because the soul music of nature will always echo in our hearts, we can dance instead of cry.
Click here to view the Let an earth song echo in your heart repertoire. 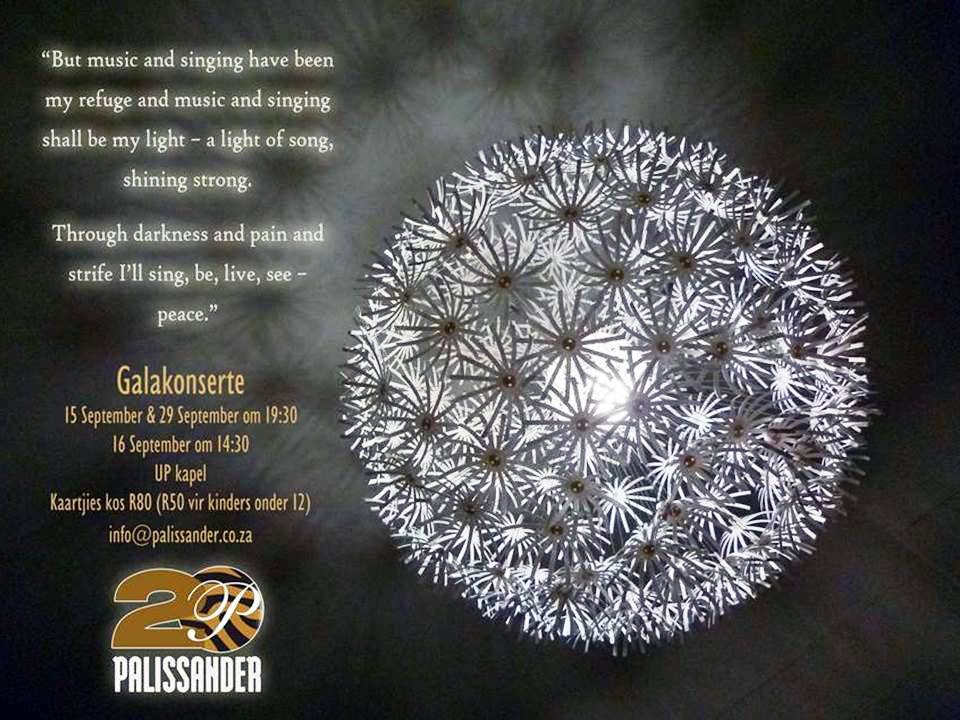 The 2012 theme portrays the fact that music and singing have been a light in the lives of choir and audience members over the past 20 years.
God is light. We therefore receive the gift of light together with the gift of music. Because music inherently contains light, singing brings light to life.

The title is a quote from Earth song by Frank Ticheli: “But music and singing have been my refuge and music and singing shall be my light – a light of song, shining strong. Through darkness and pain and strife I’ll sing, be, live, see – peace.”

Click here to view the A light of song repertoire. 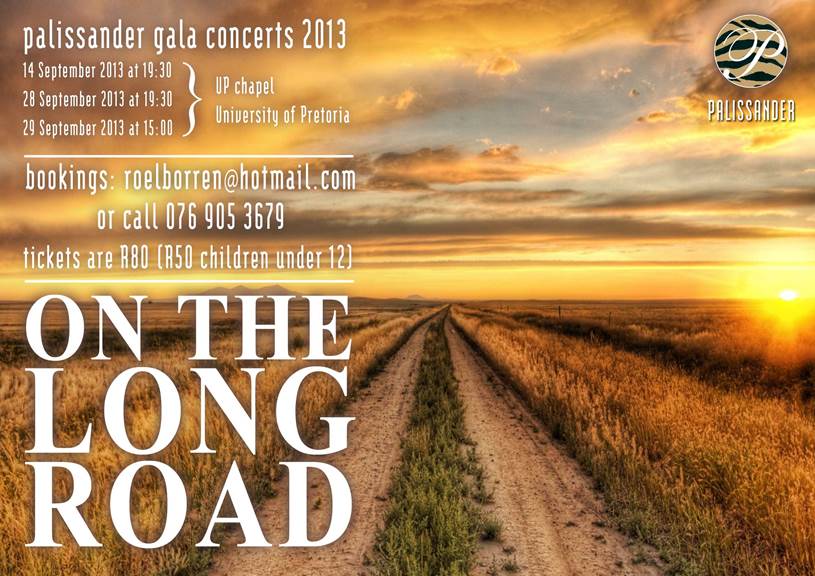 Life is a journey. On this journey we can strive to reach a new way of living; a way of forgiving. The journey becomes easier if we have fellow travellers. Along the way we may meet strangers who take care of us out of kindness. But sometimes we need to make the journey alone, without loved ones. Forks in the road force us to decide which path to choose. While our chosen road may be uncharted, God’s grace provides protection as we proceed on our journey.
The programme pays specific tribute to South African Nobel Peace Prize winners Nelson Mandela, FW de Klerk and Desmond Tutu who have walked the path before us and who have taught us that compassion, togetherness and forgiveness will guide us on our way.
We dedicate this performance to former President Mandela who celebrates his 95th birthday on 18 July 2013.
Click here to view the On the long road repertoire. 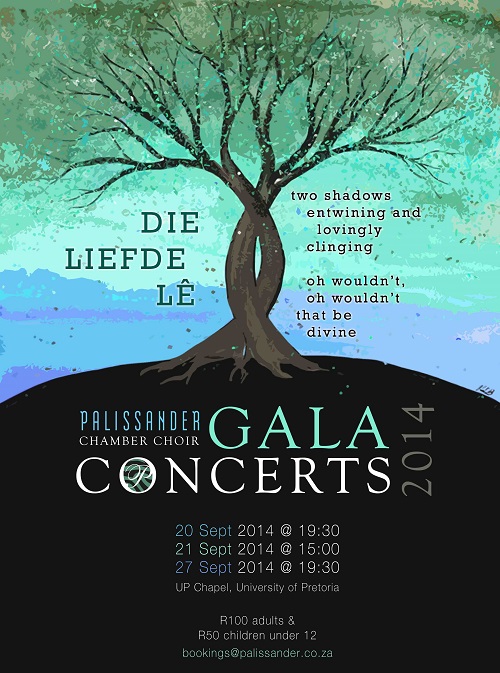 The title for the 2014 programme is an extract from the theme song Hier tussen ons. The theme song focuses on the love between people, God’s love for us, love that brings hope, love that is a hiding place from pain, and love that heals. Without love, we are nothing. We must therefore live in love. These different perspectives on love form the structure for the programme.
Click here to view the Hier tussen ons repertoire.

Our 2015 theme, "Man in the mirror", focuses on how we need to change in ourselves in order to make the world a better place.
Click here to view the The man in the mirror repertoire. 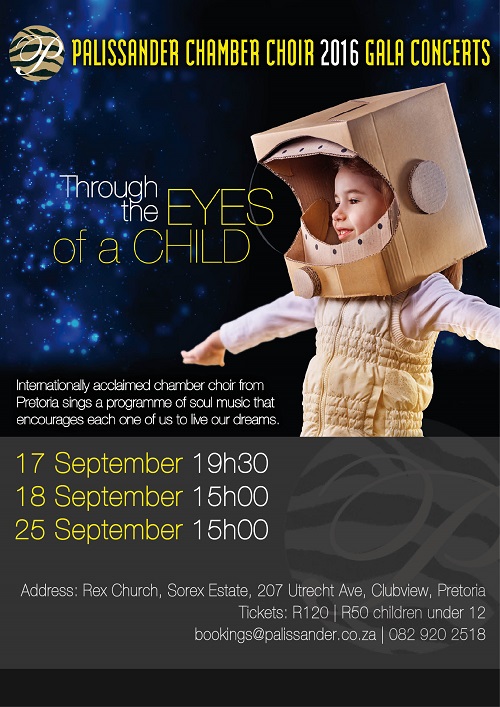 As children, we dreamt how wonderful our lives could be. However, as we become older, we tend to allow our dreams to fade. This programme challenges each one of us to dare to dream like we did when we were children, to believe that these dreams can come true, and to allow our hearts to show us the way.

While following our dreams, we are not alone. We can find our loved ones in the stars: "You'll watch the stars at night. My star will be just another star in the sky. That way you'll love watching all the stars. They will all be your friends. Because I'll be laughing on one of them, to you it will sound as if all the stars are laughing. You'll have five hundred million bells, and I'll have five hundred million wells" (The Little Prince).

Click here to view the Trough the eyes of a child repertoire. 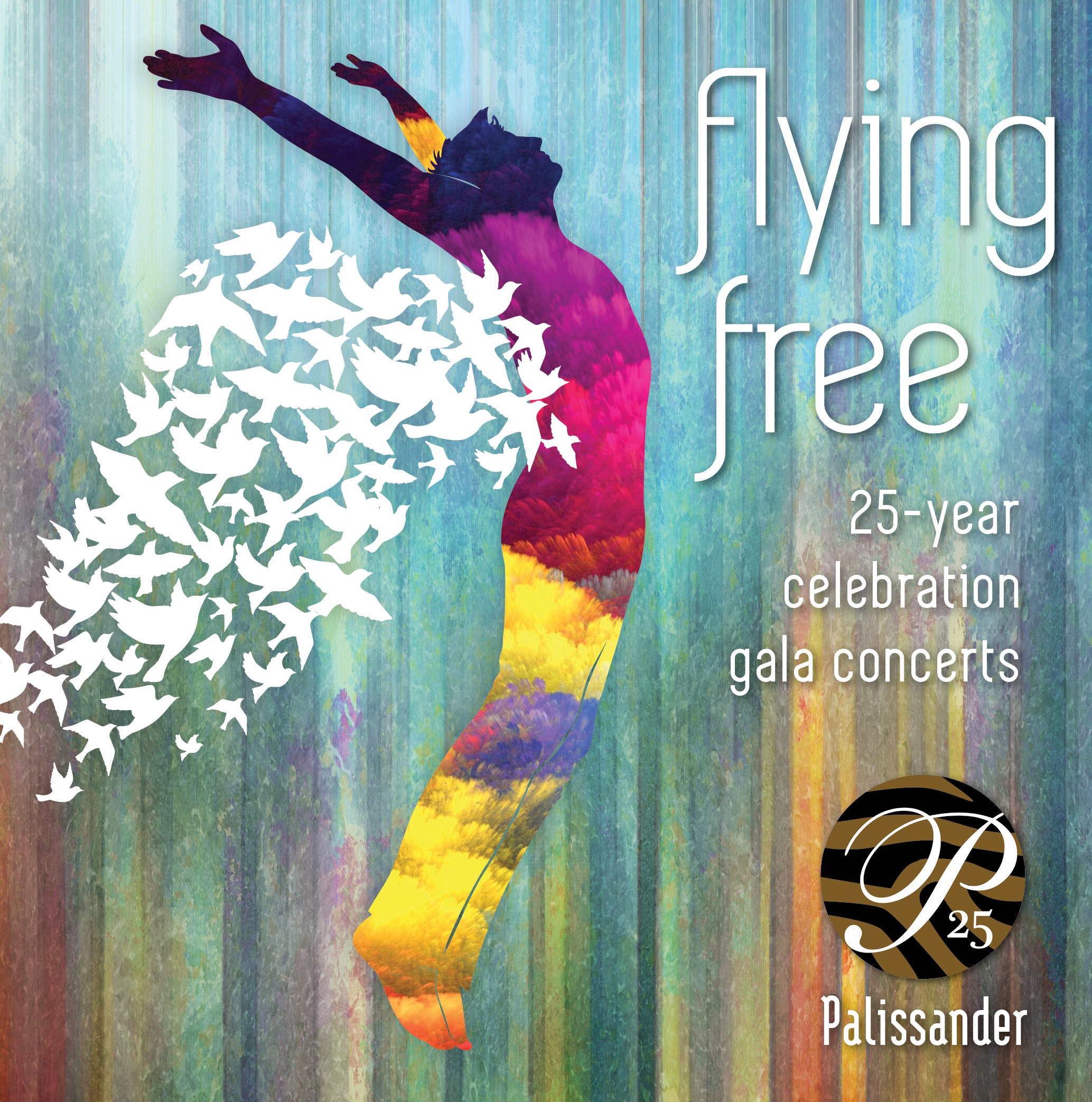 Our 25th anniversary programme focuses on the fact that music touches our soul and stays with us throughout our lives. Our birthday is also the birthday of life, of love, of the earth and of wings. Let us therefore fly free and celebrate life.

Palissander’s 2018 theme, ”umShimulu – tree of life”, is inspired by the African tree of life, the baobab, under which many African villages are established.

Just as people in rural villages need to work together to make it possible for children to dance, sing and love, we need to form virtual villages with people that cross our paths so that all of us may dance, sing and love. Moreover, the programme challenges us to become trees of life ourselves under which other people may feel safe and nurtured to establish villages of their own.